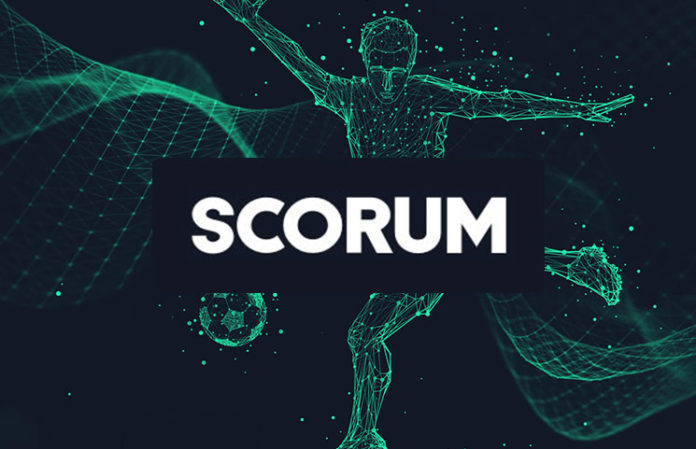 Social media for sports? The idea itself sounds interesting.

What makes such an idea revolutionary is the blockchain support.

Well, one such idea is embedded in a project called Scorum.

Fans of sports would also enjoy a personal space where they can pick and create information regarding sports.

Every time they express how passionate they are, they get rewarded. So, how can this be? Read this Scorum ICO review and find out!

Scorum was founded by three fantasy sports fanatics and professionals from Belarus.

The rest of the team is indeed superb, involving top professionals as well as two famous sportspeople – Timofey Mozgov and Alexander Hleb.

The founders saw a certain hole in the sports industry, stating that sports consumers and fantasy sport players can earn from their passion, thus making a whole new type of internal economy.

When stated in numbers, they claim that there are approximately 1 billion sports fans who are unaware of the potential profit that they make.

Namely, they generate up to 8.5 billion visits to the media that covers a wide variety of sports.

This makes a huge profit for these media, but those who were responsible for generating such a huge number of visits are left without a penny.

Scorum states that the sports industry is not willing to reward sports fans who make a profit for them, claiming this unfair.

This was a reason good enough to start correcting the problem using the new technology as well as original ideas.

Both authors and readers who engage with the content will see financial gain.

The idea of the Scorum is to award authors of content for their activity.

This can be every type of publication, comment or photo that is published on this social medium. On the other hand, readers get to vote and decide what type of content is good.

Regarding the internal economy, they claim in their whitepaper that the whole model of the economy is based on the system which makes their cryptocurrency supported by the real economy.

Furthermore, they state that all of the participants in their system should have equal benefits. Their official cryptocurrency is named Scorum Coins (SCR) and it is offered during Token Crowdsale.

The Organization of Economy and Token Distribution

Apart from Scorum Coin (SCR) which is available for purchase in the Token Crowdsale, the creators came up with the idea of Scorum Power (SP) which will serve a type of internal currency used for users’ interactions. Scorum Power and Scorum Coin have the identical value of 1:1.

You will be able to use SCR in several cases which include purchasing partner products and services, paying for in-platfrom ads and betting.

SCR purchase will be conducted via the Scorum website, and Scorum itself, together with their platform will be the functional intermediary when it comes to exchanges of cryptocurrency.

Although Scorum Power (SP) is of no interest to us currently, it is worth mentioning how users will be able to use this type of token.

First of all, they will be only usable inside the platform of Scorum. Also, they will serve as a type of prestige points.

The more SP you have, the more likely to gain delegate status and be able to influence the project development itself. People who have more SP will have more voting power as well.

Converting SCR to SP will be relatively easy and instant. On the other hand, SP to SCR is a more complicated process, which you can read about at Scorum’s whitepaper.

In order to finance this idea and the development of it, you will be able to buy Scorum Coins (SCR) which are issued by Scorum team.

As a token purchaser, you will be able to buy them during the Token Crowdsale.

However, the total number of Scorum Coins that will be issued will total in 20M. Scorum divides this number in the whitepaper the next way:

Scorum team states that this is the total number of SCR for now. All the further SCR can be obtained through conversion from SP to SCR.

Furthermore, the Affiliate Program mentioned above will give 5% of total SCR being sold by a referral code that you get when you register for this program.

Scorum points out that the fiat currency represented is just to provide information.

They state that fiat currency will not be accepted when it comes to Token Crowdsale. Instead, they will accept Bitcoin (BTC) and Ethereum (ETC).

Their hard cap is estimated at 17M USD. Also, according to the latest information, 93% has already been distributed in ICO, with the price of the SCR currently being 1.00 USD.

Undistributed Tokens, Scrotum promises, will be destroyed after the sale.

The SCR gained in the sale and distribution process will be divided in the following way: 65% for the development process, 20% for marketing and 15% for legal support.

Scorum includes in their whitepaper a detailed overview of their future spending.

What is the Progress of the Project?

The early research for the project began in 2016. Since then, they have successfully built their fantasy sports platform prototype, which was completed in December 2017.

At this moment (January 2018), we are only given a short outline of what their plans are for the future milestones on the project.

However, their whitepaper states that different parts of the project are more developed than others.

Furthermore, they say that everything is going as planned and well and that the beginning of 2018 should see their blogging platform and system for rewards ready to use.

Also, currently they are at the stage of Crowdsale and it will last until mid-February.

The Scorum team has provided a short outline of milestones regarding the project.

In short, they plan to launch blockchain and online wallet in March 2018 and to integrate the platform for fantasy sports with SCR in April 2018.

In May 2018, they plan to go public with Microsoft’s Power BI integration and to put the live blog into action, together with its reward distribution system.

June is reserved for betting exchange start while in July they plan to implement the advertising system.

In September, they will add sports data visualizations and October will be reserved for adding the most popular sports leagues of USA to the statistical center. 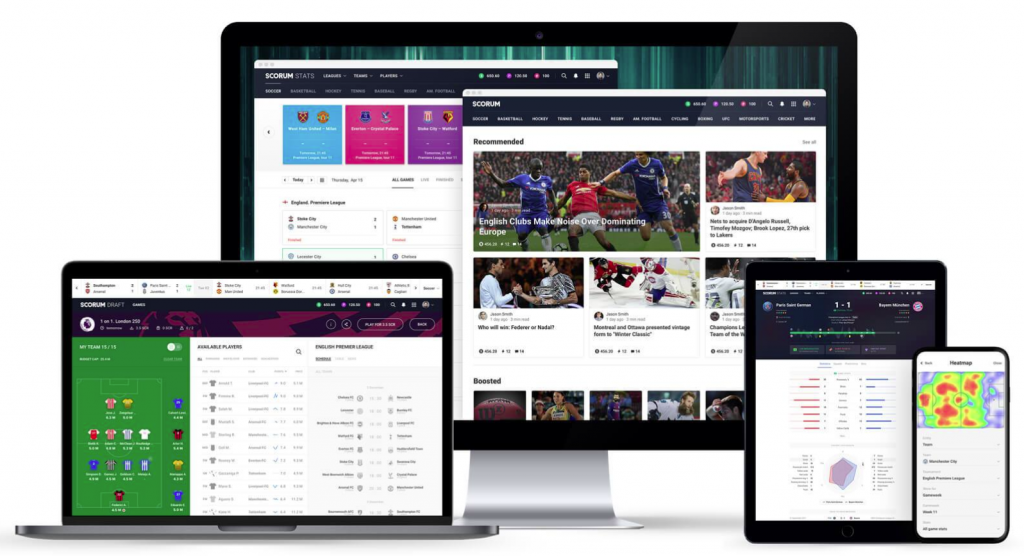 When it comes to the partners, Scorum takes pride in having some of the big ones right now. Here is a short list of their current partners and their descriptions:

FAQ Regarding the Scorum Project

Can SCR be traded at an exchange?

You will be able to trade SCR for other cryptocurrencies at exchanges.

Can SCR be mined?

SCR cannot be mined, but Scorum states that you can get rewarded by signing blocks.

What is the best wallet for buying Scorum Coins?

It does not matter which wallet you use. You will receive thorough instructions on how to buy SCR once you make an account on Scorum.

What currencies can I use to purchase SCR?

Ethereum (ETH) and Bitcoin (BTC) are the two possible options.

What is the minimum purchase for Crowdsale?

There is no minimum. You can buy as low as 1 SCR.

Is the Etherum blockchain basis for Scorum Coins?

Blockchain of Scorum is actually based on the Graphene Framework. There is a certain algorithm in this framework which is responsible for the fast speed of transaction.

Scorum team points out that it allows for as much as 10 000 transactions every second.

It will also allow free transaction among Scorum users. Steem and Bitshares use this type of blockchain system and it has received very positive feedback.

These advantages of Graphene Framework are possible because nodes signing blocks are scheduled in advance.

Furthermore, each node allows for transaction processing to be effective, and the data that is required for transactions validation is permanently stored in the memory.

When will SCR be listed on major exchanges?

First, they plan to publish the blockchain and Scorum Wallet.

This will happen, according to their milestones plan, sometime during March.

For now, they are partnered with OpenLedger and still keep other listings a secret.

However, they promised to give more info on this matter as soon as the crowdsale is finished.

How is the economic model of this project sustainable?

They base their model on three streams of revenue which are more or less independent.

Those three streams are the income from photo database, partners program and the internal advertising.

They add that they are sure to succeed because it is supported and based on the real economy.

Scorum promises to create a variety of containers in a cluster using Windows Azure cloud.

They use Azure Container service which provides great support for Scorum nodes of blockchain in a Docker-container.

They claim that this type of cloud solution allows them to be available even during peak load times.

Also, they will scale the cluster if the request volume requires so, thus making their cloud solution very convenient.

Is the Crowdsale legal?

Yes. According to their website, everything is completely regulated. They even provide their legal document called Terms of Token Crowdsale, where all the necessary information can be found.

Scorum surely sounds like a lot of fun. The idea is certainly revolutionary and as such attracted already thousands of people who are interested in buying SCR and participating in the crowdsale.

They aim very high, speaking in billions when it comes to platform visits.

Scorum goes on to claim that this will get the attention of all the sports fans and sports content creators.

This means that their idea will not only become the biggest fantasy sport and betting website but also the biggest sports medium.

Everyone gets the chance to participate, be it as a content creator or the user who evaluates content.

This means that everyone gets their fair share of Scorum Power (SP) that can later be converted into Scorum Coin (SCR).

Therefore, is you are looking to invest in a website that will eventually become the biggest sports betting market, have CPC advertising system and their own cryptocurrency with the potential of reaching 1 billion users, then you have found your heaven.

You’ve got to admit it – Scorum ICO looks pretty good.

It is exactly this combination of the platform for both sport enthusiasts and the professionals, combined with the interesting blockchain technology and good economy system that makes Scorum a smart investment. 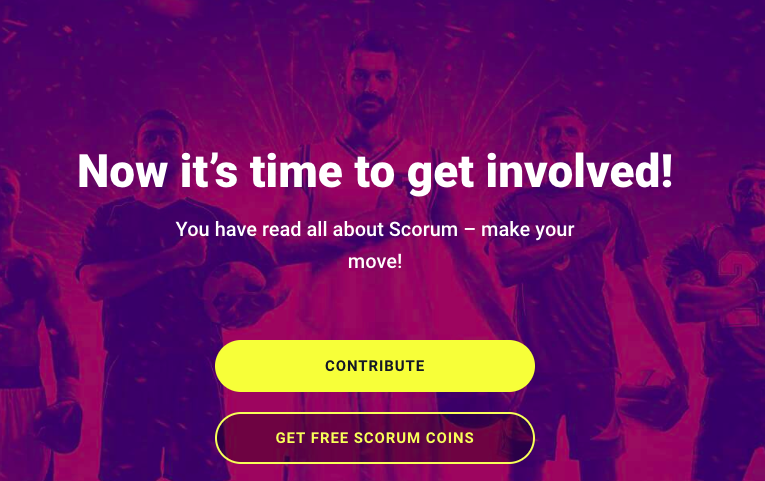