Skraps is not necessarily a new idea, but it takes an existing idea to the next level. It takes the idea that Acorn has for instance developed and takes it a step further. The problem that they want to work on and solve is that many people are wary of investing and taking big risks by investing a lot of money at once. That is why they are trying to build a platform that would enable users the engage in micro-investing. Similarly to Acorn, where you round off your balance and invest any spare change that you end up with, Skraps aims to do a similar thing, only with cryptocurrencies, as well as fiat. Essentially, with each transaction users make in cryptocurrencies, they will be able to make an investment of their own choice.

The team behind Skraps sees Millennials as an especially important group within this problem, as this idea might appeal to them the most. Rather than investing when a company is on the upswing, Skraps enables users to invest regularly, at systematic intervals. This way, the burden of overthinking investments will be eliminated from the equation. Since Millennials believe that they do not have enough money to invest in anything, Skraps will become a bridge to surpass that problem. If we imagine a situation where an average user would invest $20 per week in about 5 years that investment would grow to almost $6000. In 20 years, that investment would equal close to $35,000.

This type of investing has already been very successful. An example of the success of the micro investing system can be seen in Acorns. To-date, Acorns have as many as 2 million accounts on their platform, where almost 600,000 of those were created in 2017. This system, as well as the results that it has made, were a good enough reason for it to attract some major investment. More than $96 million has been invested in Acorns by big names such as Paypal, Bain Capital Ventures, and so on.

The team behind Acorn believes that as the blockchain industry is on the rise and the value of crypto assets is going up, crypto-investing is bound to attract more and more people. Contrary to traditional markets, crypto markets have no borders, they are available 24/7, are under minimal control and show great potential to grow. Therefore, this type of investments may prove to be even better in the aspect of crypto markets than traditional markets.

Taking a situation of incremental investment growth that we have discussed before and translating it to cryptocurrencies, potentially yields even better results. Taking into account that returns for cryptocurrencies and tokens can be as high as 15-20% per year, investing $20 weekly will end up being $7000 in 5 years and $120,000 in 20 years. Therefore, theoretically, taking into account all of these aspects, we believe that crypto-investments may prove to yield much higher profits than traditional investments.

The Team Behind Skraps

The team that is developing Skraps consists of 10 people in total, so we will give a short overview, alongside with some LinkedIn information, for the most crucial members of the team.

In addition to these 4 team members, there are additional 6 members who take positions of developers, marketers, and managers.

Apart from the 10 team members working on Skraps, there are also 4 advisors who are supporting the project. All of them have experience in blockchain and cryptocurrencies, whereas one member, Volodymyr Lytvyniuk has a high ICO success score on icobench.com of 7.1.

The general team and the advisors behind the project seem like they would know what they are doing. Most of them have good experience in blockchain and crypto industry prior to engaging in this project, therefore, we would say that they definitely have the brains to make Skraps possible. 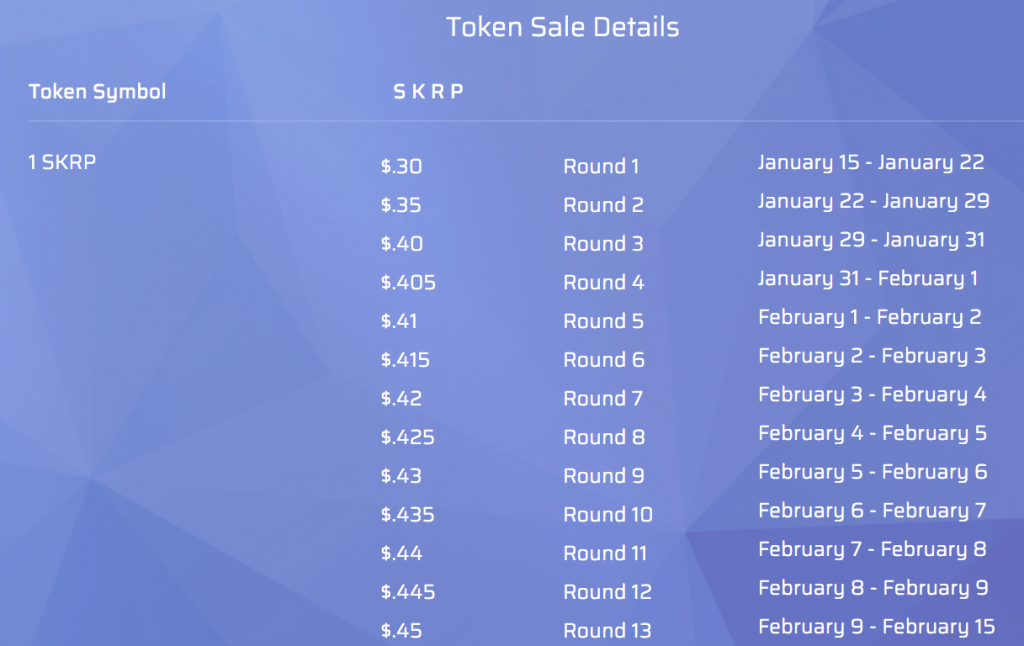 SKRAPS token is the official token for Skraps project and its symbol is SKRP.

The Skraps token will be used in two main ways:

The total number of SKRP tokens to ever be created is 110 million. From this total number, 66 million is allocated to become available as a part of the token sale in Token Sale and whitelist.

During the token sale, SKRP tokens can be bought by using BTC, LTC, ETH, Dash, Ripple, as well as Bitcoin cash.

Token Sale will take place in 13 total rounds, the first one starting on January 15 and the last one ending on February 15. During this time, the price of SKRP token will increase slightly after each round, starting at $.35 and ending at $.45 per one SKRP token.

The team has decided to fix the prices on USD because of the current fluctuations in the value of cryptocurrencies.

A minimal purchase during all 13 rounds of Token Sale will be $50. A discount will be provided for those who decide to buy tokens in the early stages of Token Sale. The highest discount offered will be 67% and it will steadily drop through each round as the sale progresses.

So far, during the first 5 rounds, a total of almost 10 million SKRP tokens have been distributed to buyers. The soft cap for the token sale is $1 million, whereas the hard cap is $21,450,000.

All funds raised during the Token Sale will mostly be used to develop the platform at to advertise it to future users. A total of 80% is reserved for these two areas. The rest of the funds will be proportionally distributed across payments for the team and managers, legal fees, exchange fees and other expenses.

It seems like the team has a good idea on how they want to allocate their funds. Also, offering incentives to potential buyers in the form of discounts and lower charges during the initial stages may prove to yield more buys. Since during the first 5 rounds almost 10 million tokens have been sold, we can assume that the number will grow as the final stages approach, as buyers might try to grab the final discounts.

As with any project and idea, there can be different scenarios and outcomes. Therefore, we have set out to create three theories as to what the final outcome of the project might be. These will be structured through the Best, Normal, and the Worst case scenario for a potential investor.

In the best case scenario, of course, the sale of SKRP tokens will continue to gain momentum and by the end of round 13, the biggest part of the 66 million tokens will be sold out. This way, the project will have enough funds to invest in the development and marketing of the platform. In the best case scenario, the team will be able to issue both the mobile and the desktop app and it that way significantly increases the number of potential users. That way, the user base of the Skrap platform will continue to rise, alongside with the rise in popularity of cryptocurrencies.

In the normal case scenario, the project will reach its soft cap and collect sufficient funds to develop the main parts of the platform and advertise it moderately to the potential users. So far, 10 million tokens have been sold, which would mean that the project has already hit its soft cap of $1 million. If the situation does not significantly improve, with a bit of luck, the team will have enough funds to allocate on marketing and in that way further promote the idea.

In the worst case scenario, even though the project has reached its soft cap, the selling of tokens will slow down and won’t get much closer to the hard cap. This would mean that the team would need to make significant cuts in budgets and make compromises between development and marketing of the platform. Eventually, the whole project might fall into the gutters.

The whitepaper features a rather lengthy introduction and motivation section where the idea is discussed. This section is not based on fluff material that is intended to lure investors, but it is supported by research. Several study cases have been linked in the first part to further develop the idea of the problem and the necessity of this platform.

As the whitepaper enfolds, we learn more about the design of the platform and the system that will be used to make it work. Here as well, a lot of effort is obvious. All aspects are discussed in a straightforward manner so that investors, as well as future users, know exactly what to expect. This further discusses and ends with the benefits of using the platform and how it will revolutionize the investment world.

The part that discusses token sale does not include information on the soft cap and hard cap and is not updated so far as to the progress of the token sale as the 5th round is about to finish. Other than that, it discusses in lengthy detail the distribution of tokens and the allocation of funds within the project.

Our judgment is that this whitepaper is written in a comprehensive manner, with an aim to present the whole project and its possibilities and risks in a straight-forward manner. Even though more info could be included regarding the token sale progress, this info can still be easily obtained on Skraps’ official website.

As it is well known, cryptocurrencies are the hot topic nowadays. The whole industry is on the rise and it is showing no signs of slowing down. So much so, that more and more governments worldwide are becoming more and more engaged in regulating the crypto market.

The problem that Skraps is trying to address and solve is a pressing one and therefore it is a good idea to base a project off. Similar platforms such as Acorns or Stash have had great success with fiat, so the chances that Skraps will succeed are high. Investing spare fiat or crypto change is an idea that sounds good both to the uninformed and to the expert investors as the risk factor is very low. If the team continues to develop the product in a quality manner, the project will have good prospects.

Therefore, we say that the project is generally one of the more meaningful right now, regarding the issue they are focusing on. If the team does a good job with marketing and if the app interface proves to be simple and easy to use, we see no real reason why this project would not be a success.