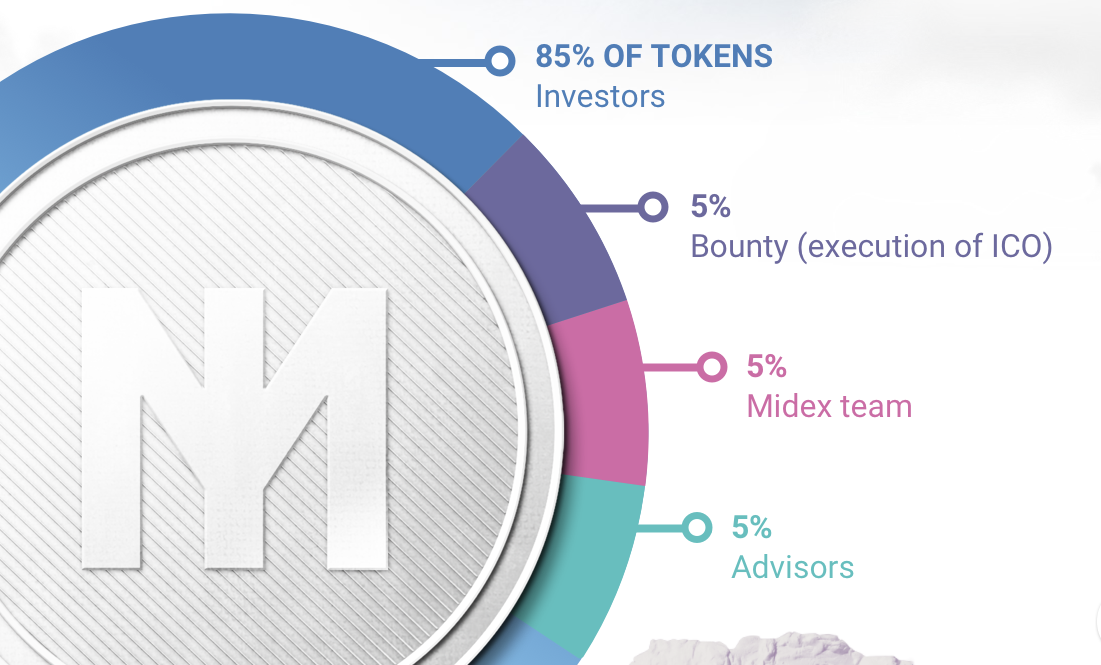 Midex is one of the companies which will try to incorporate the world of cryptocurrency and blockchain into the financial market. There are already several companies trying to solve this problem, and we will review how Midex plans to do and whether it is worth our time and investment. Read on this Midex ICO Review to find all the important details!

The main problem which the people at Midex currently perceive is the fact that the cryptocurrency market is separated and it is still growing. There are still no efficient ways to connect your crypto assets to your card or any type of bank account. Furthermore, it is very difficult to pay something with cryptocurrency and most of the businesses still do not allow it.

If you want to pay for something with your, let’s say, Bitcoin (BTC). You need services of several companies to successfully exchange the money and transfer it to the seller. Therefore, Midex plans to implement a centralized exchange platform which will instantly exchange your cryptocurrency for the currency that you currently need. This will be done at the best exchange rate possible for you will both save time and money that would have been spent on additional fees of all the intermediary companies.

It is inevitable to mention that the Midex team aims high with their project. They called it in their whitepaper “the first cryptocurrency band” and described its start as the “momentous event for the entire world economy”. However, we’ve got to admit that it really sounds rather interesting and if the project is successfully realized, it can surely change the way we perceive money.

The services that the users of Midex will have when they register the platform will involve cryptocurrency exchange, escrow service, ATMs or “cryptomats” as they call it, payment cards, ICO center, marketplace for investment, marketplace for credit, payment systems.

Sounds impossible? Well, everything is possible in the future. That is why you should consider investing in it

What makes Midex stand out is the support that it has from the Swiss bankers. The realization of the project will include an open API and the 10 different and innovative ways to deposit the assets into your account on the platform.

The best thing about Midex is the Midex token (MDX). If you happen to possess some of their tokens, you will be able to both receive certain bonuses and use the token for buying articles in their shop. Furthermore, MDX will allow you to buy info on confidential markets and view further analytics. This alone is the opportunity good enough to buy their tokens during their sale, which will be discussed later on.

The Team and Advisors

There are currently 11 active team members and 2 advisors. Here is a short list of them and their positions

The two advisors are called Renato Almeida from Brasil and Gabriel Brack from Switzerland. It is Gabriel who represents the Swiss bankers and who is a FINMA licensed asset manager, providing the firm support for the project and the team that is working on the project.

We think that the team consists of professionals who will be able to create the platform successfully and that they are on their way to do so. However, the number of advisors is currently too small, and other advisors from all around the world should support the project. Ideally, the bankers from the US would provide even firmer ground for the project to take off.

Midex token (MDX) will be the cryptocurrency that will be used both within the system and outside the system. The internal use was mentioned earlier, and the external use would include discounts in hotels and cafes, paying for plane tickets, getting bonuses with many companies and buying entrances to exclusive events all around the world. Therefore, buying MDX is very profitable, and the sale of the tokens is currently underway.

The MDX token is based on Ethereum and it is ERC20 compatible. We could not manage to find the exact dates on when the sale will end, and the presale began somewhere mid-December of 2017. The problem with the final date is that varies from a website to a website, with no exact date on the official Midex website. It is possible that the ending time will be set upon reaching a certain amount. There is no soft cap mentioned and the hard cap is 75 million MDX sold, which is the total amount of MDX. The number of tokens which is sold at the moment of writing this article is estimated to somewhere around 5 million.

A total number of 75 million MDX tokens will be released in ICO and 85% will go to the investors. Furthermore, the advisors, the team and the execution of ICO (bounty) will get 5% each.

The only currency which is currently accepted is ETH. However, we hope that this will change soon as then the whole idea of the platform will prove invalid. The tokens in the pre-sale were sold ad 1PreMDX = 0.00108 ETH. Currently, the price of 1 MDX is equal to one dollar (1 USD). All of the unsold tokens will be burned. 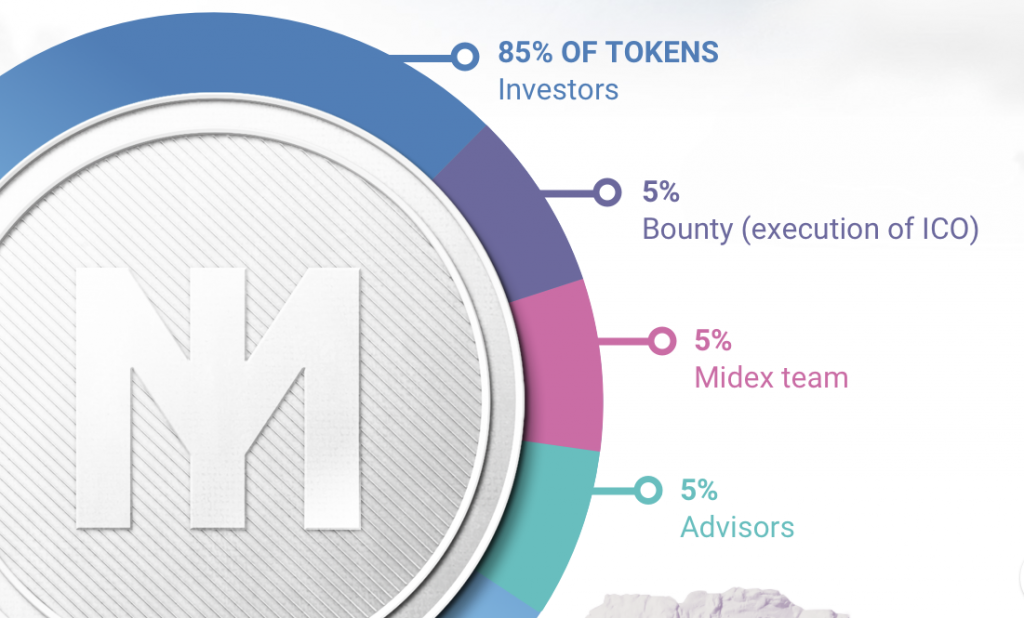 This section will provide the overview of the best, the normal and the worst case scenario for this company in the future. The following text references an opinion and is for information purposes only. It is not intended to be investment advice. Seek a duly licensed professional for investment advice.

The best case scenario would involve Midex taking over the global market and people realizing its potential, thus massively using the platform to exchange currencies. The value of MDX will go up and the 20% of the revenue from Midex commissions will be distributed to the holders of the token accordingly. This means that you can have a pretty solid passive income just by having the tokens on your account.

The normal case scenario would involve you as the investor having the ability to use all the benefits that the token holders have, but that would exclude any type of big passive income. You would continue using the platform as a privileged user and would have probably access to the additional features that will allow you to consider your further investments and to speed up the exchange process.

The worst case scenario is that the company fails to promote the platform and not enough users accept their technology. This is possible if the people worldwide generally remain unaware of the power of the blockchain technology and cryptocurrency. Thus, we believe that one of the main goals of Midex should be to promote the cryptocurrency as the most convenient currency to use in the future.

The whitepaper is a 43-pages long overview of the project and it will point out everything that you need to know about the project. It begins with the thorough overview of the problems that are currently blocking the further development of the blockchain and cryptocurrency technology. The solution is given right below and, after that, the whitepaper goes into detail, describing all the possibilities that will be present on the platform and how the platform will change the world. You can read everything that you want to know, including goals and tasks, products and services, implementation solutions, legal regulations, Midex team, and Midex token. Furthermore, the whitepaper also has glossary, legal notification, and references at the end which places it among the well-researched, almost-academic papers.

There is one thing, however, that the whitepaper misses and that includes more information on how token sale is distributed. We see this as a minor throwback, due to the fact that the whole point of the platform will be the focus on tokens, currencies and fiat money. Thus, we were unable to find the information about the exact start and finish of the MDX sale. Nevertheless, it is a great whitepaper and if you plan on investing in Midex, you will certainly have fun reading all the details on how they plan to put everything into motion. 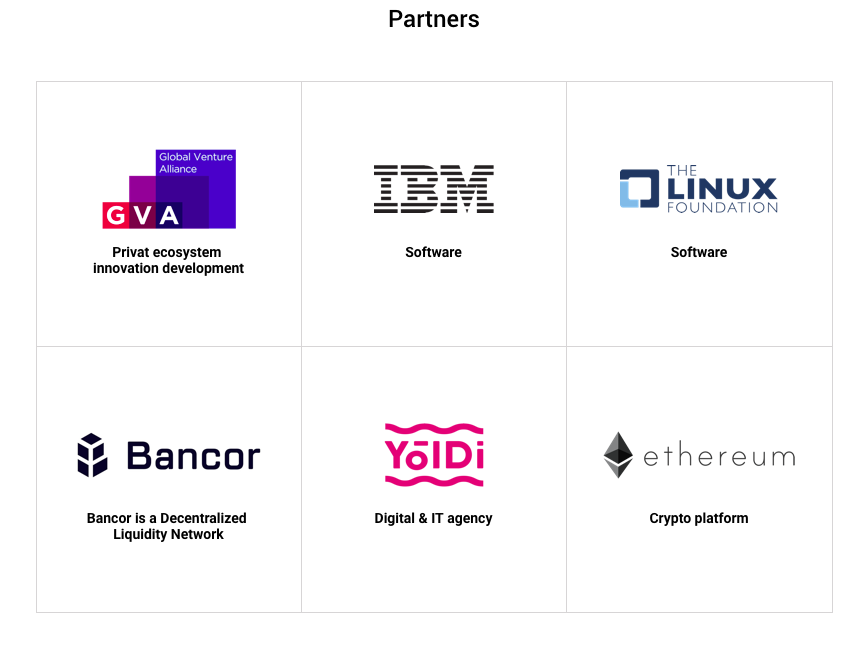 This roadmap will list some of the most significant plans for the future and the finished tasks.

The idea that people behind Midex have sounds more than promising. The platform will not only be there to support modern banking technology but also to provide opportunities that the internet of things, blockchain technology, and big data offer. Furthermore, the type of security standards that they promise to implement is groundbreaking and the users will be able to feel safe and enjoy their first completely online bank account.

If you plan to invest in Midex, now is the time as we have no detailed info on whether the price for their token will go up in the future. If all of their promises for the token-holders are true, then you should definitely spare some Ethereum change and consider buying yourself several of their tokens.

Midex is still in its infancy and we sincerely hope that the project will succeed, as that will help not only investors and users of the platform but every economy in the world, thus proving that the cryptocurrencies are here to stay and become incorporated into the everyday use.